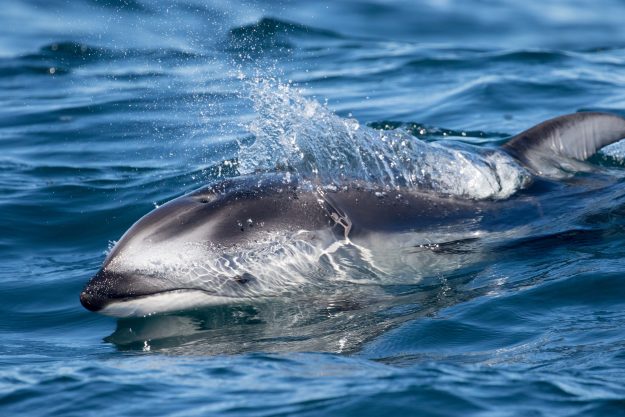 We left Monterey harbour with a blue sky, a hot sun, and we were quite happy to meet a little bit of wind to take a bit of edge off the heat. Passing the harbour breakwater covered in California Sea Lions, Captain John picked up speed and carried us out west on the Pacifica, as…

Since 2008 the Monterey Bay National Marine Sanctuary has included a seamount within its boundaries: Davidson Sea Mount. Dr. Andrew DeVogelaere spoke at Science Sunday about explorations and comparisons of Davidson Sea Mount, Sur Ridge and the Monterey Canyon. NOAA (National Oceanic and Atmospheric Administration) has been studying the deep-sea habitats of Monterey Bay National Marine Sanctuary with remote operated vehicles (ROVs) and underwater autonomous vehicles (UAVs). Since 2002 they have documented and classified 19 new species during their explorations. Some of the most impressive creatures they document are deep sea corals.

Deep sea corals can live thousands of years. They are very slow growing invertebrates that in shallow water create a symbiotic relationship with algae to share resources and food. In the deep sea, the corals are carnivores that feed on marine snow – small particulate matter that float in the water column.

The corals at Davidson Seamount and Sur Ridge have been aged with carbon dating to 1500+ years old. Corals lay down growth rings as they age. In these growth rings is evidence of changes in the atmosphere – some corals have radioactive signatures from when above ground nuclear testing occurred.

In addition to corals growing slowly, sea water takes a long time to transit through the deep sea. When water circulates through the world’s oceans it can be at depth for over a thousand years before it reaches the surface again. The particulates in that sea water carry signatures of previous atmospheric conditions and nutrient compositions. Water that gets upwelled during the spring and summer season here in Monterey Bay has been in the deep sea for a very long time!

As these deep-sea areas are explored, scientists are also observing the effects of human activity even in these environments. Dr. DeVogelaere had a good quote he used during his talk. “The creatures of the deep sea knew about us long before we knew about them”. Man-made debris is more prevalent at Davidson Seamount in comparison to the Monterey Canyon or Sur Ridge due to its proximity to the shipping lane approach to San Francisco. However, there is a shipping container on the sea bed in the Monterey Canyon that has been studied since it was discovered seven years ago. The container was tracked back to the ship and company it came from and it turns out the container was lost in rough seas south of Monterey Bay and was carried on the currents until it settled on the sea floor in the canyon.

Our global problem with marine debris / pollution reaches even the most remote places on our planet. Marine snow now contains microplastics that settle on the sea floor so the problem isn’t even completely visible to the untrained eye anymore. We all should participate in daily conservation and become advocates for our planet in whatever small or large ways we can. Whether that means bringing a reusable water bottle with you, writing a letter to a company that uses plastic packaging, participating in a beach clean-up, or something else, we all can do something small each day.