First off, I know what you are thinking, what in the world is a Cuvi-what whale?? There are 23 different species of Beaked whales which all have a long snout or “beak” and  they are very deep diving animals. Their deep diving abilities are what we are highlighting and in awe of in this post. Some species have never even been seen alive! Here in Monterey we are graced by the presence of two different species on rare occasion. The Baird’s and the Cuvier’s Beaked whale. Cuvier’s max out at around 23ft and are often traveling in groups or pods of 10 or less individuals. Although this species is far from common, they are the most “commonly” seen of all of the Beaked whale species. If you are ever on a whale watching trip here in Monterey Bay and you lay eyes on these magnificently elusive creatures, buy a lotto ticket instantly. Seriously. Just do it…and then give yourself a huge pat on the back, a “I just saw a beaked whale” happy dance, or any other kind of celebration you can think of! We have some crew members that haven’t even had the privilege of experiencing this special sighting yet!

Cuvier’s recently held the world record for longest dive, but thanks to some new research produced by the Duke University Marine Laboratory, they have been documented blowing that previous record out of the water!! The new study published at the end of September 2020 documented a 3 hr & 42 minute, yes let’s reiterate that…a THREE HOUR AND FORTY-TWO MINUTE DIVE!!! Their original world record was just over 2 hours long and was documented in 2014.  Marine mammals have special adaptations that allow them to dive for much longer periods than your average person, but even so, scientists are seeking to discover exactly how this particular animal can sustain such long underwater dives and then recover so quickly from these no doubt taxing performances.

These photos of Cuvier’s were taken by Co-Owner/Captain John!

(Yes, we are very proud to say that we have both done the “I just saw a Beaked Whale happy dance”!!) 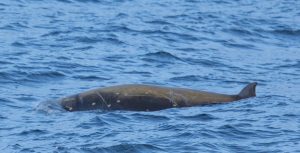