Seasons in the sanctuary:

There are several peaks throughout the year for whale sightings. It is possible to see whales any day of the year and every trip we go on is different. 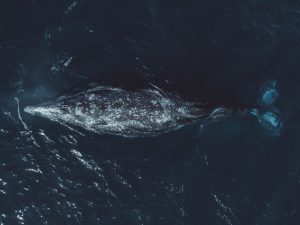 The peak of the Southbound Gray Whale migration is during the middle weeks of January. If you were to sit at Pt Pinos in Pacific Grove and watch whales all day, you could see more than 30 whales an hour during this time of year. We often see large groups of whales passing through the area on their way to Mexico. It is also possible to see humpback whales who have chosen to spend the winter in Monterey. Humpbacks have become more common during the winter months as the population recovers and there is an abundance of food in the bay. We typically see a variety of dolphins year-round. Winter time dolphin sightings include pacific whitesided dolphin, northern right whale dolphins, common dolphins and occasionally, bottlenose dolphins. 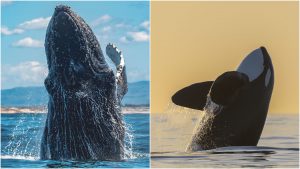 This time of year, brings an amazing mix of wildlife. The northbound gray whales are passing through Monterey Bay, including moms and calves. This is also the peak time of year to sight killer whales (otherwise known as orcas). As the spring season progresses, our local humpbacks will return to the bay for the summer and fall seasons. We tend to get afternoon wind from the Northwest most days, which drives the enormous upwelling cycle in the bay. Upwelling is the key to our local ecosystem, creating a huge abundance of life in a very dense area. Other species that could be sighted this time of year are blue whales, fin whales, and a variety of dolphins and porpoises! 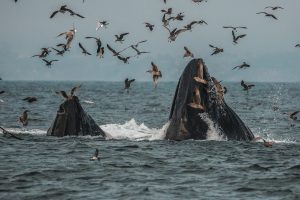 Summer season is feeding season! Our local baleen whales such as humpback, blue and fin whales are attracted to the abundance of food in the Monterey Bay National Marine Sanctuary. In particular, the rich waters in the network of submarine canyons in the bay. The spring and summer upwelling brings cold, nutrient rich sea water to the surface fertilizing all the phytoplankton, which is the base of the food chain. This concept is called “Wind to Whales”. From mid-July to early October we regularly see feeding whales on our trips. Our main species which is sighted daily is the humpback whale. It is also possible to see blue whales, fin whales, killer whales (aka orcas), and a variety of dolphins. 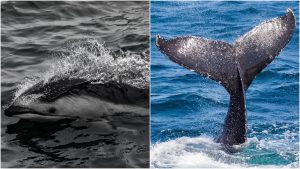 Fall is another great mixing time. We usually have some stretches of favorable weather in the fall as the upwelling season comes to a close. There is still plenty of food in the canyon network in the bay which keeps the whales here until late November some years. As our feeding whales start to slow down and leave the area for migration, many more are passing by the coast. It is also possible to see a variety of dolphins, northern elephant seals, killer whales (orcas) and a few early gray whales. 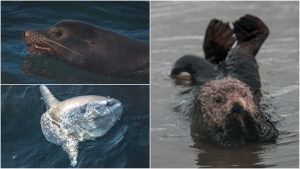 We can see a variety of pinniped, birds, fish, shark and invertebrate species throughout the year as well! We see southern sea otters almost every single trip in addition to california sea lions, and harbor seals in or near the harbor. Some of our less common pinnipeds such as northern elephant seals, northern fur seals and guadalupe fur seals are seen in deeper waters in the bay during trips. Often times we sight ocean sunfish or Mola mola during our trips and we will stop and take a look at one while it is basking at the surface if we can. If you are interested in seabirds, we have a wonderful variety of species in the bay throughout the year and our marine biologists and naturalists will help point them out to you. We occasionally see sharks, but they tend to be very skittish around the boat, so most encounters are a passing glance. There is a huge variety of invertebrates such as jellyfish and salps that we can see during our trips, our crew will point them out to you if there are large abundances of them near the boat.

Check out this link for our running list of school resources