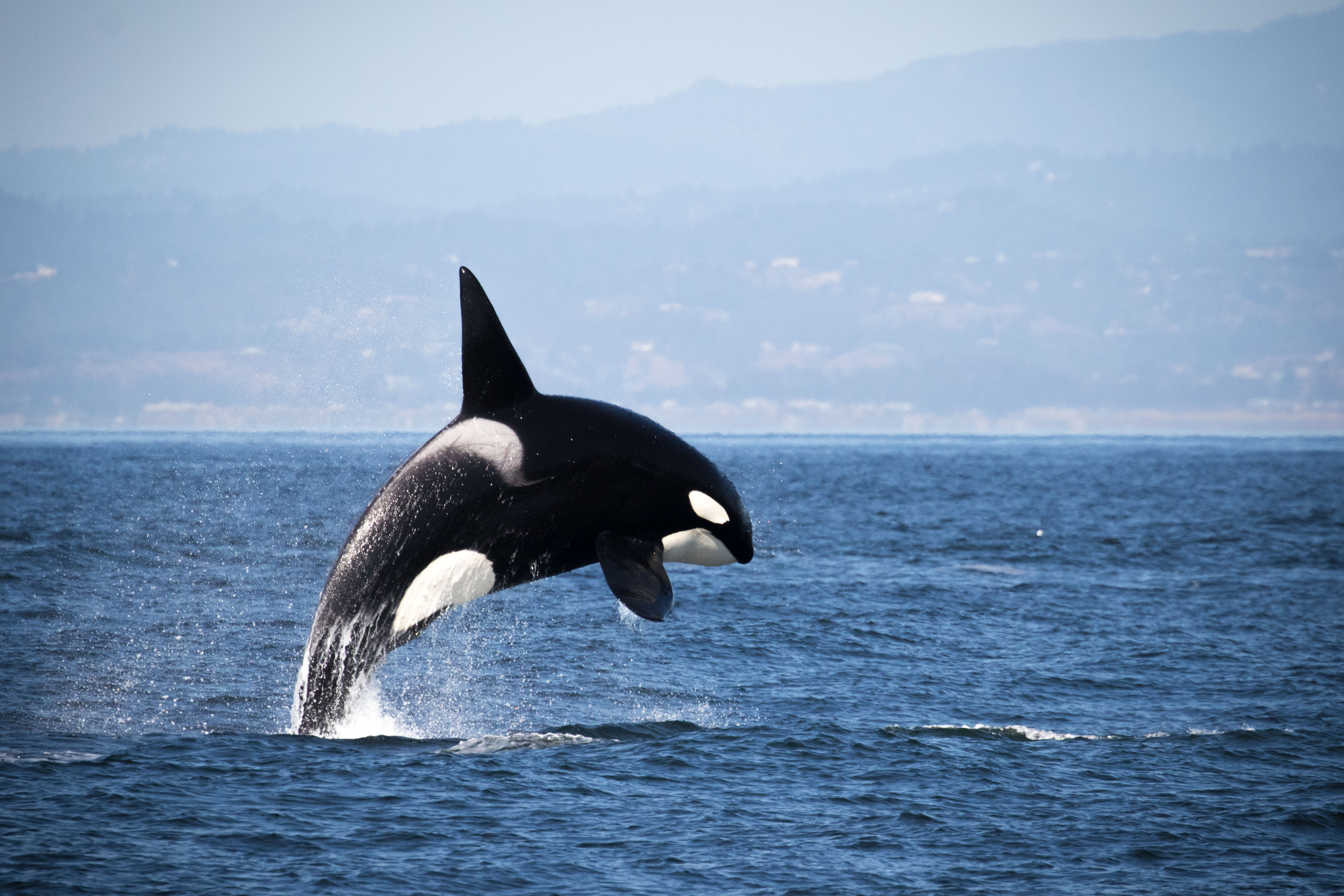 Yesterday, the weather had gotten a little bit too rough for us to safely go out. I was itching to get back out, and couldn’t wait to get on board the boat today. We set sail on the Pacifica with Captain Danny and deckhand Kevin, heading down across Del Monte beach to a sighting our friends had called in before we had even left. We were lucky to get our first cetaceans of the day right next to the beach, in 30 feet of water!

It started off with a single humpback whale giving us really good looks. It was doing dives of less than three minutes, it was showing well, and it popped up really close for one surfacing. Even though it was in shallow water, we still got an awesome tail fluke from it. 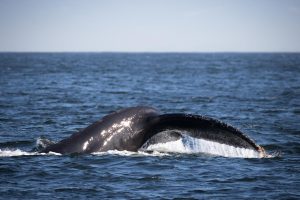 We’re enjoying this whale, and just as we’re about to move on into deeper waters we spot a little bit of movement in the surf – bottlenose dolphins! Normally this species doesn’t show for too long, and they will often not be too friendly with the boat, so I didn’t expect too much from them. They proved me wrong this time, coming right up to the boat and giving us awesome looks! Probably the best look that I’ve had of this species since arriving in Monterey five months ago. We had a group of about 10 come up to us as if they were investigating the boat. They played around in the water next to us for a bit before heading back into the surf, to shallow water where we couldn’t follow. AMAZING! 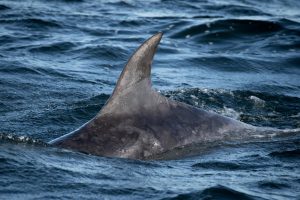 We were only about 45 minutes into the trip and we had two cetacean species under our belt. We started moving out into deeper water, keeping our eyes on a few spots that looked particularly bird-heavy. We did see a few more humpback blows in one area and pulled in to try to relocate them. I’m looking out hard all around the front, and Kevin is looking around at the back when I hear somebody talking over channel 80 on the radio.

“I got Killer Whales!”

It was our friend Kate with Blue Ocean Whale Watch, running out of Moss Landing harbour. Immediately I ran (more like fast-walked – don’t run on boats, kids) back into the wheelhouse.

Of course, we were going.

I told the passengers we had a cool sighting a while away and that we were going to pack up and leave. I didn’t want to actually say what we were looking for, just in case they disappeared before we arrived. However, one Austrian couple had been standing right by the wheelhouse and had heard the call come out. They promised not to tell anyone, and we jumped up and down (again I’m exaggerating for dramatic effect – don’t jump on boats, kids) with excitement as Captain Danny picked up speed and pointed the boat towards Moss Landing.

We’re getting closer. We receive word that the Killer Whales have taken down a California Sea Lion. We get closer again. I have to sit down and take a few deep breaths to contain my excitement. We continue getting closer. And then, soon enough, we were there.

Our first look was of three individuals that had broken away from the group – one big male, and two that were either females or young males. 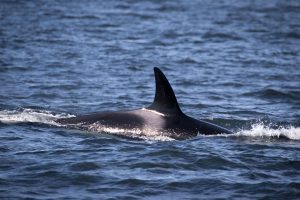 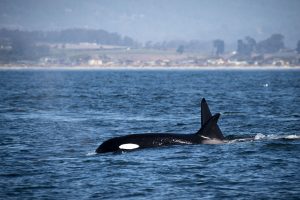 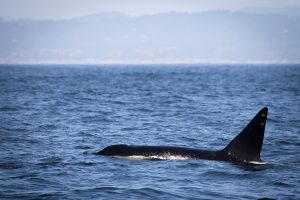 Amazing! Great looks at these guys. We paralleled them as they started to make their way back towards the rest of the group, and this is where we really started to see nature unfold.

A lone California Sea Lion sits in a circle of water, surrounded by splashing. The brown of its fur stands out amongst the blue of the water, the white of the splashes. The black and white patterns of the predators. 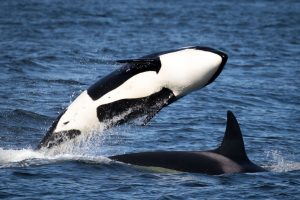 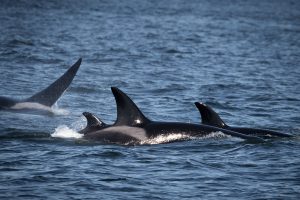 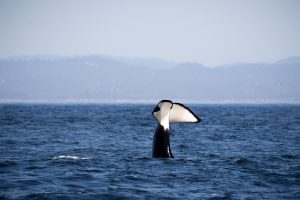 The sea lion, still struggling, is pushed towards the young calf as if they’re trying to get it used to the ways of the hunt. Another Killer Whale leaps out of the water, this time repeating the behaviour three times in a row. More tail slaps. More splashes. Finally, the sea lion gets dragged under and we don’t see it come back up. The Killer Whales, the apex predator of this area, stay down for about 5minutes this time. Next time they surface, they’re calmer, and there is absolutely no evidence of the ruthless, relentless, ramming and ripping that we’d just been witness too. 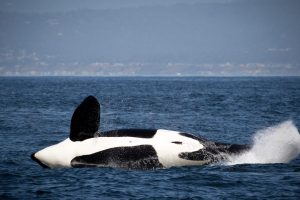 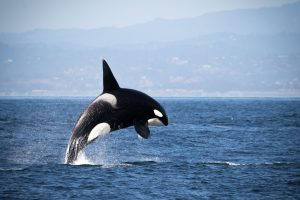 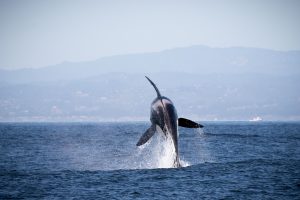 The whole thing is over, and the Killer Whales go back to being their beautiful, cute selves. In fact, it may have been possible to completely miss the whole predation event that just occurred, mistaking it for splashing and playing. But there was no mistaking the sea lion that was there at the beginning and gone at the end. Nature is a beautiful thing and sometimes it just gets a little bit more vicious out here. I do love the sea lions, but Killer Whales gotta eat, you know? Kind of like all that stuff Mufasa was saying. Circle of life.

We were all very happy with our looks at this amazing animal as we headed back towards Monterey. It’s so awesome seeing this creature running about wild and free, living their lives, and teaching the next generation how to do the same thing. 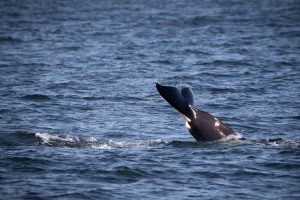 The thing with Killer Whales though, is that they are a very fast-moving creature. For our afternoon trip, there was no way to get back out to the group as they had just started to move much too far north. I was very happy to go watch some humpbacks though! Kevin and I switched boats, hopping onto the Chubasco with Captain JJ.

We had another really nice trip, this one was a lot more peaceful. Throughout the trip, we caught up with three humpback whales – all of them getting us great views, especially of their tails. We even managed to catch up with some lunge feeding! I stopped to think for a couple of moments about how even though these humpbacks were eating hundreds (maybe even thousands) of fish, it still seemed much more peaceful than the Killer Whales predating just one animal. Just a weird little thought, from my weird little brain.

It was great having a bit of time to just spend with the humpback whales, especially because I hadn’t spent much time with them recently. Beautiful, peaceful creatures. These guys will probably be gone by the end of November, so I’m trying to make the most of my time with them while I can. 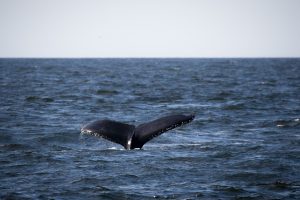 I stepped off the boat very happy. Another great day out here. Oh, and I also saw a sea otter eating an abalone. 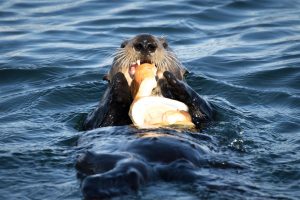