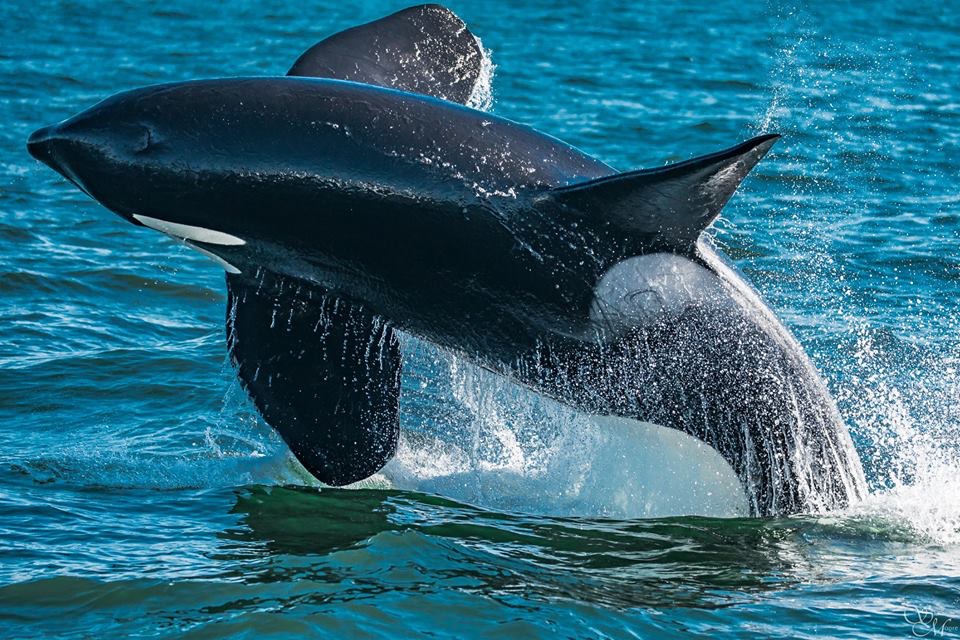 Killer Whales Galore! September has been filled with sightings of Bigg’s or transient Killer Whales. We have mostly observed the same family pod since the 19th of this month. The main pod of 5 whales is identified as the 51A, 51A2, 51A3, 49C and 50B. These whales are loosely related and have been sighted all together for each encounter. The matriarch, 51A had her two offspring with her. She is also sighted with 49C during every encounter over the last few years.

This is fairly atypical for Bigg’s or transient Killer Whales, usually the matriarch travels with her own offspring until the older daughters have a few calves of their own. As a general pattern for Bigg’s or transient Killer Whales; once the daughter has her own calves she will go off and make her own pod. It is speculated that this is to keep pods small for hunting purposes, to avoid detection from prey. These animals also live a high-energy lifestyle and must hunt several times a day to ensure that they all get enough to eat. Family pods will join together for larger hunts, such as elephant seals and gray whale calves. The matriarch of the 51’s, which 51A is originally from, is still alive today and travels with her three youngest offspring. 51A is a classic example of how pods partition themselves as they grow in number.

We did indeed also sight 51 and her other children this week near Carmel Bay. The 51’s currently travel as a pod of 4 whales. The 51A’s and others have been sighted closer to Moss Landing most days.

In the case of 49C, this whale has not been sighted with its mother or siblings for years and instead has joined 51A and her children. We do not fully understand when or why these whales have come together in the same pod, but we do observe that it’s a pretty permanent relationship.

So, what is happening with the addition of 50B? Well, we have not seen his mother for several months. It is possible that he is loosely related to the 51’s and now 51A has taken him in. We have seen him with the 51A’s during every encounter since we noticed that 50 (mom) was missing. Time will tell if this is a permanent relationship.

Sea lions have been on the menu this month! We have observed a number of hunts and some amazing play behaviors from the main pod of Killer Whales we have been sighting. There were several hunting sessions that were also training sessions for the young juveniles in the pod. When this happens, we do see the older whales, particularly mom, move side by side with the younger whales showing them how to maneuver around the prey. They also take turns ramming and waking out the prey to practice. These training sessions do drag out the time it takes to kill and eat the prey, which is not for the faint of heart. The post hunt celebrations can be pretty spectacular too. The juveniles in the pod have been like popcorn popping out of the water a few times! We also had the adults put some of our guests in the splash zone a few days ago while enthusiastically breaching toward the stern of our boat several times in a row.

Fall is a good time of year to see Killer Whales and we are off to a great start! We hope the season continues to bring us more sightings of these powerful animals.