Amazing trips today!! On the morning trip we witnessed one of the coolest things you can see whale watching in the Monterey Bay. We saw a pod of orcas in the process of hunting and killing a grey whale calf. There were about 15 orcas, including 2 males, and 2 calves. There was a lot of splashing, tail flukes, and a fair amount of blood. The mother grey whale was doing all she could to protect her calf, but the orcas were too strong and their teamwork was too good. They separated her from her calf, while the rest of the pod finished off the calf.
In the afternoon we went back to where the kill had happened. The orcas were still there, but this time they were feeding on the carcass. Unfortunately this feeding happens under water, so we could just see them circling and diving repeatedly. During this activity we got some of the closest looks you’ll ever get at orcas.
-Naturalist Alfredo 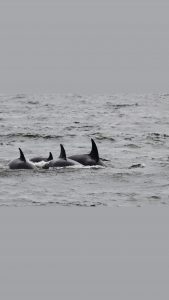 2020 A Year in Review By Naturalists: Eric, Alfredo, & Isaiah
January 12, 2021
Our Motto
We strive to provide our passengers with an inspiring and educational experience on Monterey Bay.
Schedule
Instagram Feed
Cannot get other user media. API shut down by Instagram. Sorry. Display only your media.